Do we really eat safe food? The reply cannot be a clear yes. The factory farming is producing toxic foods as the scientific findings revealed.  Sometimes I think ‘a day will come when the living people will say “those who killed in wars and disasters are luckier. Eating from the poisonous field make us prone to various health issues. Just watched a TV program on RT, how the factory farming is poisoning our field and ultimately our bodies. 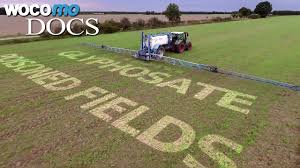 Roundup (active ingredient Glyphosate) is the world’s most widely-used weed killer. Some claim it’s completely harmless, others say it’s a serious health hazard for humans and animals. The WHO has suddenly called for an all-out ban on glyphosate, considering it toxic and probably carcinogenic. This film sets out in search of sick animals, humans and plants in Germany, Denmark and the US, and asks how the WHO reached these new conclusions and what action the Federal Institute for Risk Assessment is taking poisoned fields: Glyphosate, an underrated risk?

While googling, there are many research based peer reviewed articles proving that this product is causing cancer and also developing Autism in the kids. Are our generations are safe? The decision makers should not ignore this fact. There must be a concreted outcome of the whole discussion as going on among the scientists.

I found Dr. Stephanie Seneff, the author of more than 170 peer reviewed scientific article is focusing especially on this alarming issue. Stephanie Seneff is a well-known scientist emphasizing on the consequences of the Monsanto roundup, GMOs and the factory farming.  Some scientists and activists have the fears that up to 2050, around half of the kids in USA will be autistic. Also, Glyphosate causes low or poor fertility in dairy cows who depend on the food coming from such a poisonous fields.

I have been arguing since last 12 years that small scaled ecofriendly agricultural system is the solution to such threats like poisonous fields. We should eat less but quality products. We should not pose threat to the whole humanity just to earn some extra pennies. Let’s advocate small farming and promote the products come from small farmers and pastoralists.

6 thoughts on “The Poisonous Fields”