I am Raziq belong to the remote and the poorly infra-structured area of Pakistan named as the Balochistan province. I completed my PhD dissertation on the local livestock especially camel and pastoralism. I worked in the north-eastern part of Balochsitan known as the Suleiman Mountainous Region. Actually two areas of the north-eastern Balochsitan i.e. Suleiman region and the Kakar Khurasan are the cradle of the livestock breeds and rich in organic agriculture. The people of the area rarely use synthetic means to cure their animals and to increase the fertility of the lands.

I would like and wish to write in detail about the practices the local farmers use to produce organic food and to explain their efforts to save the friendly environment, which might not be possible in one email. I would like to write on each topic in detail on by one. Please find below a brief of my study on organic practices by the pastorals in Suleiman mountainous region in Pakistan.

What the pastorals do?

In Suleiman mountainous region, about 96% of the pastoral people of the region depends on the organic farming, out of which 97% follow seasonal migration along with their livestock with or with out their families. All the flood irrigated agriculture is practice without using chemical fertilizer and pesticides. Only the tall local variety of wheat is used for the flood irrigating agricultural fields. Majority of the farmers follow their indigenous star calendar for the crop cultivation and animal breeding program. About 83% of the pastoral people believed that indigenous knowledge is more reliable, easy applicable and cheaper than western style of medication. The pastoral people preferred to use their own animal based products like Ghurree (butter oil), butter, Shlombey (whey), Kurht (dried cheese) and Lanthi meat rather than the products available in the market for the same purpose. The region is very famous for organic agriculture and livestock production in pastoral system, since centuries. They use flood water for irrigation of their Bandat (small dams or plats). The flood water is rich source of organic manure composed of soft mud, animal dung and foliage. They fill their Bandat in Wassa (monsoon or wet season) many times, to further increase soil fertility and the soil humidity shelf life. At the end of the Wassa (October) crop fields are ploughed mostly by bullocks and asses but the large farmers use tractors for this purpose. 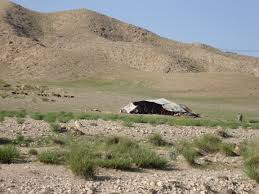 The current higher fuel prices and the continuous land distribution between the increasing numbers of families once again increase the use of working animal for ploughing. No flood water is applied after sowing of the crops and only natural precipitation provides humidity. The crop of wheat is harvest in the month of June, and if the early monsoon starts the Bandat are again filled and the pulses or grains crop like sorghum, millet and maize is cultivated. These all crops are used by the farmers themselves and very small portion are spare for sale. In many cases they offer the surplus grains to their animals in rainy days. Only the large farmers have excess crop than their use. The lands are use mostly for one crop annually and therefore, sustain their fertility.

The local varieties of crops are used which are already resistant to diseases. The farmer of the area uses the tall varieties of the wheat, which are disease and drought resistant. The variety also insect resistant and wild bird like sparrow cannot eat its grains in milky stage. The tall variety of wheat also produces more straw for their animals than the dwarf hybrid verities. The straw is offered to the animals especially cattle in the dry and scarce period.

Majority of the pastoral people (96%) depends upon the organic agriculture and livestock production. The pastoral people exercise a regular system of migration. Aujla and Jasra, (1996) also reported that the pastoral communities throughout Balochistan fallow a regular pattern of migration depending upon various factors. About 97% of the pastoral people follow seasonal migration along with their livestock with or with out their families. They transport their families and luggage on the back of camels, asses and sometime bullocks are also used for this purpose. The pastoral people have two types of settlements in a year depending upon the vegetation, water availability and season. Their movement originates from the winter settlement (Mena) after the wheat harvest and move upward in the high mountains to summer or wet season settlement (Gholie). They use the vegetation of the highlands and the pleasant and cool weather. The spent wet season there, graze the fresh and succulent vegetation. The well drained topography during the wet season of monsoon result in the lower risk of disease outbreak especially the foot and mouth disease. Some herbal plants found on the highlands like Artimisia, Ephedra and others are well praised for their health friendly characteristics. The farmers believe that offering these herbal plants once in summer keep the animals away from diseases round the year.

Then the pastoral people come down in the autumn after harvesting the vegetation of the high Alps to keep their animals in comparatively warmer and favorable environment. The winter grazing area is strictly banned for grazing in summer and wet season and such a system is known as Pargorr locally. The animals graze on comparative low lands in winter near the crop fields and Piedmont.

The farmers strictly follow the star calendar Permani for sowing and cultivation of the crops. This system is the part of their centuries old indigenous knowledge. The same calendar is used for the animal breeding, movement, housing management and all other livestock related activities. By the grace of this system the farmers save their livestock and agriculture from the heavy use of medicine and pesticides. About 83% of the pastoral people believed that indigenous knowledge is more reliable, easy applicable and cheap than western style of medication. Their mode of life, production system and pastoral way of life make their life easy, near to nature and health friendly.

The pastoral people preferred to use their own products mainly based on organic agriculture, rather than the products available in the market. They use wheat, maize, sorghum, millet and pulses from agriculture origin. The animal products like Ghurree (butter oil), butter, and Lamm (fats of the fat tailed seep), Shlombey (whey), Kurth (dried cheese) and milk are used in the spring and summer seasons. In winter they use Lanthi meat and animal fats to coup with the cold waves of winter season. Lanthi is a dry meat prepared by drying meat under natural temperatures, humidity and circulation of the air, including direct influence of sun rays. The cool and dry air of the region is well suited for this type of preservation. This method is the oldest method of meat preservation. It consists of a gradual dehydration of pieces of meat cut to a specific uniform shape that permits the equal and simultaneous drying of whole batches of meat. Such a meat is prepared from the mutton of sheep, beef of cattle and camel. Camel milk is very much liked by the pastoral people. They know the health friendly characteristics of camel milk and Kohi camel is the best of the area for reasonable milk yield while keeping on ordinary range like conditions (Raziq and Younas, 2006).

Women help in feeding, milking and management of animals at home and taking care of young and sick animals. She also takes part in the crop production and harvesting activities. The women manage all the activities at home like cooking, cleaning and washing and bringing water from outsides. She cares the home and the kids for all necessities (Raziq, 2006, 07).

The study concluded that organic farming still provides safe and secure food to the majority of the people residing in the region, especially the pastoral people. The better health status of the people of the area is due to this precious food which is produced without the deleterious residues of chemicals and pesticides. There is need to save this system as the increasing commercial agriculture and vegetable production is a threat for that system. For more vegetable production, heavy use of pesticide and fertilizers is practiced which results in the adulteration of the food chain. The old and organic system is not only a production system but also the part of the heritage and culture of the area. So there is need to conserve this system, their crop verities and animal breeds according to their own needs and perspectives.