Camel’s milk as a remedy for autism-afflicted Malwa

A workshop is underway at Baba Farid Centre for Special Children in Faridkot. Tribune file

Soil contamination can wreak havoc with human health. There is growing fear in many parts of the Malwa region in Punjab that the presence of heavy metals in the subsoil has led to autism, mental retardation and learning disabilities among children. A study conducted by Baba Farid Centre for Special Children (BFCSC) along with the National Research Centre on Camel (NRCC), Bikaner, shows that autism can be treated. Of the various treatments suggested, camel milk is also being recommended in treating autistic children.

Children who were given camel milk have reported better sleep, increased motor-planning abilities and spatial awareness, more eye contact, better language, and less gastrointestinal problems. This has fed demand for camel milk, especially in the Malwa region. At present, the NRCC is providing camel milk at the BFCSC, Faridkot, for autistic children. For research works, it is supplying the milk at Faridkot, Bathinda, and Ambala. The price of camel milk depends on quantity and transport. Dr. Pritpal Singh, who is working for autistic children at the Faridkot center, hopes that camel milk will prove beneficial for such children. Many doctors claimed that autism is neither a mind nor a genetic disorder. It is a biochemical disorder involving the whole body. “Lower immunity with repeated bacterial and fungal infections, multiple allergies, autoimmunity, and leaky gut with diarrhea or constipation are universal. Camel milk, in these cases, works like a magic potion,” said Dr. Amar Singh Azad, chief consultant at Baba Farid Centre. The BFCSC has taken up a research project in collaboration with the NRCC. Dr. Amar Singh Azad, Baba Farid Centre, Dr. NV Patil, director and Dr. Raghvendar Singh, principal scientist, NRCC, are supervising the project.

Under the project, autistic children of the Baba Farid center were given 500ml of camel milk along with other treatment. The raw camel milk was brought from the camel research farm in Bikaner in a cold chain and distributed to four BFCSC centers — Faridkot, Bathinda, Ambala, and Patiala. The results which are evaluated with the help Autism Evaluation Checklist (ATEC SCORE) have been positive. ATEC SCORE, a scientific tool, is used to measure improvements among the children consuming camel milk. This score has 77 items with 180 marks which are auto-analyzed by software, which is operated by Autism Research Institute. Nearly, 41 children of Baba Farid Centre were analyzed with this score and it was found out that on an average, there was an improvement of 26 points. In 27 children, the improvement was 25 points; in 11, it was 26 to 50 points while in three, the improvement was more than 50 points. There was no child who showed no improvement.Dr. Azad said, “The first phase of the research is over. In the next phase, we will take 30 children who are consuming camel milk but are not taking other treatment and another 30 children who are drinking camel milk with other treatment. This will help to establish the exact role of camel milk in managing autistic children.” 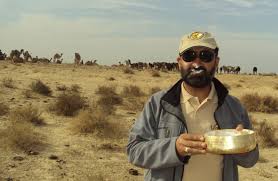 He said research in other countries had also revealed that camel milk was effective in tackling autism as a study in Saudi Arabia had proved that autism symptoms improved with camel milk.Dr. Raghvendar, head, ICAR-CSWRI, Avikanagar, says studies published in the International Journal of Human Development showed that the consumption of camel milk improves immunity among autistic children.