This picture was shot in Mangrota camel fair. This is Brella camel. One can see the the wide and long teats and very visible milk vein. This breed has promising quality of milk production. Very docile and a real milch breed. 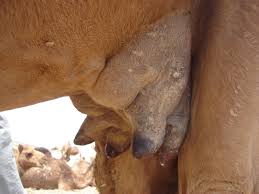 Beside the opposite point of view, as a practitioner of camel dairy I have the experience of correlation between udder vein and milk yield though it is not that strong interaction. For some camels it is strong correlation while in the others it is nil.

In short, we can say that a prominent and big/wide milk vein if not directly link with the milk yield but it is a real dairy character in camels. Its gives the portrait of the healthy camel at least.